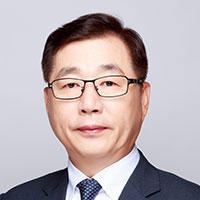 In this study, response control of 76-story wind excited tall building using semi-active TMD is undertaken. The building is 306 m tall reinforced concrete office building with central core and perimeter columns and having an aspect ratio of 7.3 thereby making it wind sensitive. The building was proposed to be built in Melbourne, Australia. For the proposed building wind tunnel tests have been carried out at the University of Sydney. Only across wind response is used in this study by removing the mean component of the wind response. A semi-active tuned mass damper is proposed which consist of TMD controlled with 20 tons magnetorheological (MR) damper. MR dampers are semi-active type of device which requires lesser space, and requires a very less power (operated on batteries) thereby making it very useful device particularly during severe seismic or strong wind events. This semi-active TMD is installed on the top floor. Force applied by the MR damper is controlled using clipped optimal control method using acceleration feedback thereby reducing the structural response. Response control performance is evaluated in terms of the control constraints and evaluation criteria specified in the benchmark problem definition. The numerical simulation results show that better response reduction is achieved using semi-active TMD as compared with passive TMD whereas, semi-active TMD can be compared to an active TMD, but fortunately the power required by semi-active TMD is quite less than an active TMD making it more practicable during severe seismic or strong wind events. The semi-active TMD is the most promising device for the future super-tall buildings.