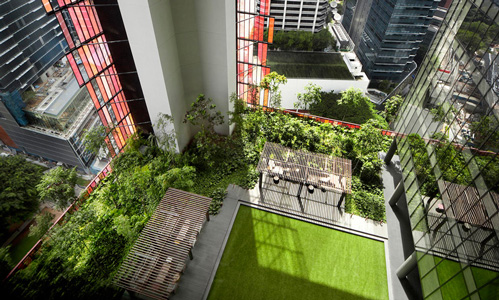 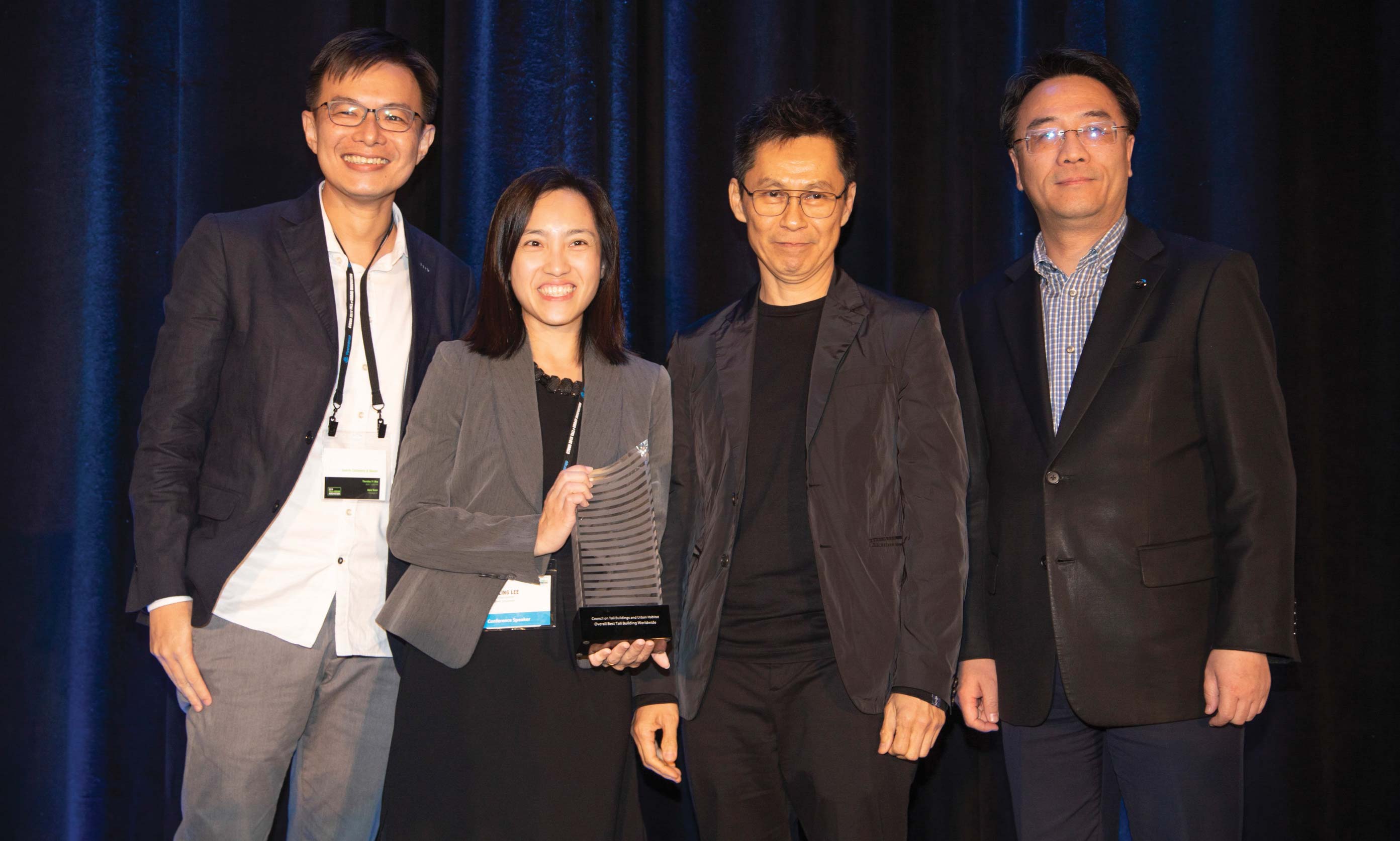 CHICAGO – The Council on Tall Buildings and Urban Habitat (CTBUH) is proud to announce the winners of the 16th Annual CTBUH Awards Program, which competed for winning distinctions at the 2018 Tall + Urban Innovation Conference from May 30-31 at Aqua Tower in Chicago. The CTBUH Awards Jury has named Oasia Hotel Downtown the “Best Tall Building Worldwide”, in addition to recognizing the winners of nine individual award categories.

The winner of Best Tall Building Worldwide exhibited a number of characteristics that impressed the judges. The visually-striking Oasia Hotel Downtown stands out amongst the gray and blue high-rises of Singapore with its plant-covered façade of red and green, which connects to the green of the cityscape. Landscaping is used extensively as an architectural surface treatment, and forms a major part of the development’s material palette, with a total of 54 species of plants climbing along the aluminum mesh façade screen. With a substantial commitment to outdoor communal space through the incorporation of “skyspaces” along its height, the tower provides respite and relief to its occupants, neighbors, and city.

“This project won not only because it incorporates 60 stories of green walls along the exterior,” said CTBUH Executive Director and Awards Juror Antony Wood, “but because of its significant commitment to communal space. The tower has given over 40 percent of its volume to open air communal terraces in the sky.”

In addition to the regional and overall Best Tall Building winners, a number of other award recipients were recognized at the conference, including the World Trade Center Master Plan for the Urban Habitat Award; MULTI for the Innovation Award; The EY Centre for the Construction Award; New York Times Tower for the 10 Year Award (2007 Completions); and Shanghai World Financial Center for the 10 Year Award (2008 Completions). In all, the 10 awards winners were chosen from a group of 48 Finalist projects representing 28 countries.

The CTBUH Tall Building Awards are an independent review of new projects, judged by a prestigious panel of experts. The Awards aspire to provide a more comprehensive and sophisticated view of these important structures, while advocating for improvements in every aspect of performance, including those that have the greatest positive impact on the individuals who use these buildings and the cities they inhabit. All projects recognized in the CTBUH 2018 Awards Program, including Finalists and Nominees, are featured in the first of a brand new book series, entitled Tall Buildings + Urban Habitat: Volume 1.

This category recognizes projects that have made extraordinary contributions to the advancement of tall buildings and the urban environment, and that achieve sustainability at the highest and broadest level. The winning projects exhibit processes and innovations that have added to the profession of design and enhance the cities and the lives of their inhabitants.

American Copper Buildings represent a venturesome and highly visible architectural statement along the edge of New York City’s East river. Clad in copper on the north and south façades, the color and refractive qualities of the towers will patina gracefully over time, shifting from a russet brown to a signature blue-green throughout the years, much like the iconic Statue of Liberty. Perhaps the most conspicuous structural element is the three-story skybridge connected the East and West towers, which creates intriguing corner spaces and provides residents with a unique way to appreciate their home.

One of our favorite features, when we were [designing] the pool, we said we had to put the pool in the [sky]bridge so that you could swim from one skyscraper to the other, 300 feet in the air. It creates this new idea of what urban living on the waterfront can be. 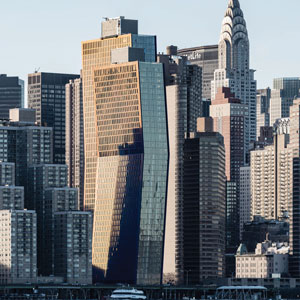 The Silo has been transformed from a grain container in the formerly industrial Nordhavn area of Copenhagen into a contemporary residential high-rise. The interior has been preserved as raw and untouched as possible, while a façade made of galvanized steel has been installed on the exterior of the former silo to create a climate shield. The Silo embodies the importance of restoring original structures in cities, as a matter of environmental sustainability, as well as an ethical and visionary approach to cultural heritage.

For architects, one of the hardest jobs of working on a project like this is that we’re already falling in love with the old silo structure, this monolithic, slim and aesthetic building, and it’s a question of how you can transform it into a livable building that still contains the old soul of the silo. 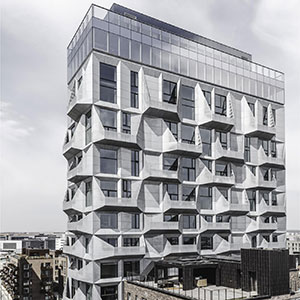 Zeitz MOCAA represents the adaptive reuse of a massive grain storage and silo complex on the downtown waterfront of Cape Town, South Africa. The top portion of the taller building was transformed into a luxury hotel, while the bottom portion of the elevator building and the storage annex would become Africa’s first international museum dedicated to contemporary African art. From the outside, the greatest visible change to the original structure is the addition of glass windows inserted into the geometry, which by night transform the building into a glowing beacon on Table Bay.

It was a challenging undertaking, and there were very loud calls for the original structure’s demolition. There’s no surprise as to why – it’s valuable real estate, and much less risky to build something new. But my response to that was, why would you do that? It was the mix of old and new that drew us to the project, and there’s multiple layers of history there. We didn’t want to wipe the slate clean, and what would you replace it with that has this much power? 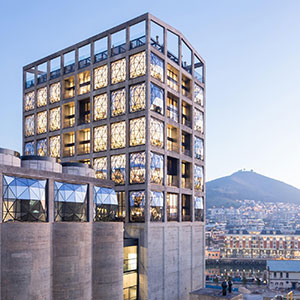 This award acknowledges that the impact of a tall building is far wider than just the building itself, and recognizes significant contributions to the urban realm in connection with tall buildings. Awardees demonstrate a positive contribution to the surrounding environment, add to the social sustainability of both their immediate and wider settings, and represent design influenced by context, both environmentally and culturally.

The World Trade Center Master Plan in New York City forms a welcoming and open space that is meant to foster the democratic values of public assembly that played a pivotal role in the city’s collective response to the attacks of September 11, 2001. At the center of the space are two reflecting pools that deeply puncture the vast flat expanse of the plaza, forming empty vessels that delineate the location of the former towers. The design knits the site back into the urban fabric, allowing the site to be a living part of the city once again.

You can break some buildings, but you can’t break our spirit. In essence, this was the inspiration for the World Trade Center Master Plan. The most important aspect of the memorial is that it’s open to all as a completely public space. Although the intention of the September 11 attacks was to frighten us, we didn’t want security on the site; we wanted it to be open and free. 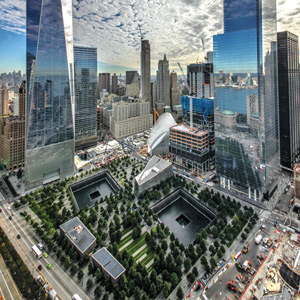 This award recognizes a specific area of recent innovation in a tall building project that has been realized in a design, implemented during construction/operation, or thoroughly tested and documented for its suitability in a high-rise. The areas of innovation can embrace any discipline, including but not limited to technical breakthroughs, construction methods, design approaches, urban planning, building systems, façades, and interior environment.

MULTI, the world’s first rope-less, multi-directional elevator, harnesses the power of linear motor technology to move multiple cars in a single shaft, vertically and horizontally. The potential that can be realized from this innovation is extensive. MULTI requires fewer and smaller elevator shafts, and can thus increase a building’s lettable space by up to 25 percent. Perhaps most exciting, the introduction of a multi-directional elevator opens up infinite combinations of vertical and horizontal building design opportunities.

Given the rapid advance of technology, who knows what buildings will look like in 10 years? Cities are changing, and we need to be flexible in order to adapt. MULTI is like a merger between a train and an elevator using linear motor technology. In terms of frequency and routes, we can create the equivalent highways and city roads in the shaft of an elevator. 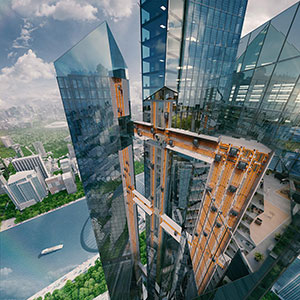 This award recognizes construction excellence in a tall building project, made evident by superior quality in construction, significant technical innovations, the proficient execution of a complicated or exacting design, a triumph over difficult conditions, or the documentation of superlative speed and efficiency.

The EY Centre employs a world-first timber-and-glass closed-cavity façade (CCF) system, made possible by innovation in digital technologies, that helps the building achieve impressive sustainability standards while creating an approachable office space for tenants. Attention to detail was critical in the project’s delivery. A team used a 3D modeling platform to create an exact replica of the triangular timber soffit and awning, which could be meshed with as-built survey information to allow for prefabrication and high quality pre-assembly directly from the 3D models.

The façade is characterized by the revolutionary use of timber. Prior to The EY Centre, a closed-cavity façade had never been used in a high-rise before. We wanted to reimagine the commercial high-rise as an art form. The best thing about the project is its sense of place; the vision was to use natural materials, in this case timber and stone, to make it more inviting. 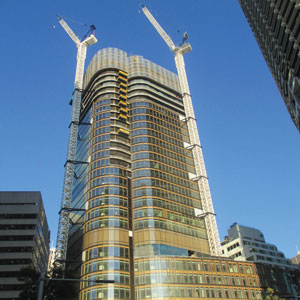 The 10 Year Award recognizes proven value and performance over a period of time. This award gives an opportunity to reflect back on buildings that have been completed and operational for a decade, and acknowledge those projects that have performed successfully long after the ribbon-cutting ceremonies have passed.

New York Times Tower stands out in the city’s busy skyline, with its distinctive grille of white ceramic brises-rods wrapping around the structure. These elements help the building achieve a high level of transparency while reducing the heat load to a point where the building is energy-efficient and yet has the great luxury of floor-to-ceiling, water-white glass. The façade includes a first-of-its-kind shading system that automatically adjusts to block glare, and the lights dynamically adjust to dim or turn off if the natural light is sufficiently bright.

We wanted a building that would change our culture and how we were viewed by the community. At the time we had employees scattered within several buildings, but we wanted to bring management closer to our employees. As a global media organization, openness and transparency were our guiding principles. 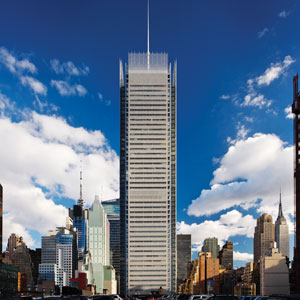 Shanghai World Financial Center is a symbol of commerce and culture that speaks to the city’s emergence as a global financial capital. The tower’s boldest feature, a 43-meter-wide portal carved through its upper levels, is dramatic, but also services a distinct structural function – it relieves the enormous wind pressures on the building. This design boldness has allowed the SWFC to endure as an indelible feature of the city’s skyline 10 years later.

When we began designing this building back in 1994, it was going to be the tallest building in the world. We focused very much on the symbolic quality of the building both within its community but also as a world symbol of the emerging global economy of China. With Shanghai’s skyline growing, the purpose and role of this building was to create an urban stabilizer on the skyline, a focal point that welcomes the activity of the city. 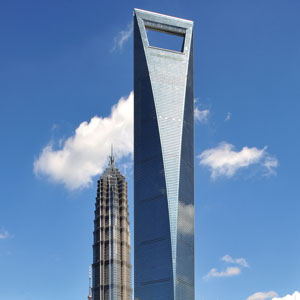 Tom Waters, Project Director, Mirvac Group presents “A Creative Use of Closed-Cavity Façades Opens Up New Possibilities,” focusing on the unique shading system for the EY Centre in Sydney. The project went on to win the Construction Award later in the evening.